Recently, African movies have been trying to catch up to the likes of North America, Asia, and Europe in the business. There are some of the biggest stars in Hollywood that are African.

Adewale Akinouye Agdbaje, Djiomn Hounsou, and Lupita Nyong’o are just a few who have gone on to represent Africa and win major honors throughout the world.

In this article, we will be looking at Africa’s Highest Grossing Movies Of All Time.

In fact, these films were filmed in Africa, where they are among the highest-grossing ever.

You read it right. Unknown to many viewers, various African nations served as locations for the record-breaking and mouth-watering superhero movie.

The action science fiction film Black Panther is situated in an African village named Wakanda, which has a high degree of technological advancement.

He must return to Wakanda after the death of T’challa’s father, but he is challenged by Erik Killimonger (Michael B. Jordan) who claims the throne of Wakanda after serving in the US armed forces.

T’challa has a battle to fight and a country to rebuild, and he succeeds. Big stars such as Forest Whitaker, Michael B. Jordan, and Chadwick Boseman star in this film and it has been praised from all corners of the globe as it has broken several records since its release in 2018.

As of 2018, it was the second most grossing film of all time and the ninth all-time. Critics’ Choice and Academy Awards were only a few of its many accolades. In addition to this film’s depiction of the potential and strength of Africans, it was shot in many African nations, including South Africa, Zambia, and Uganda.

This film is a part of the Marvel Cinematic Universe (MCU) and costs $200 million to produce, yet it grossed $1.347 billion at the box office, so you should know why it should come second place on our list. 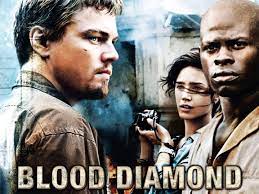 Jenifer Connolly stars along too. It’s set in post-civil war Sierra Leone and chronicles the era from 1991 to 2002 when the nation was ripped apart by turmoil.

Djimon Honsou, a Mende fisherman, and Leonardo DiCaprio, a former soldier turned mercenary, team together to find a priceless stone that will change their lives forever.

To put it simply, the term “blood diamonds” is used to describe diamond sales that were used to support the conflict between the government and rebels.

Warner Bros. Pictures released it with a $100 million budget and made $171.7 million at the box office. It was filmed in Sierra Leone.

The Gods Must be Crazy

If you’ve never seen this movie, I highly recommend you do so as soon as possible. The movie will make you laugh out loud, and you’ll want to watch it over and over.

Located somewhere in Botswana’s Kalahari desert, an isolated tribe of indigenous people lived peacefully until a Coca-Cola bottle falls from the sky. In the hamlet, there is a disturbance, and it’s implied that the gods are wrathful because of this. As the bottle is taken out of the community by their leader, Nixau, the drama begins.

An estimated 5 million dollars was spent to produce this 1980 film, which made $200 million at the box office and was filmed in Botswana.

The Last King of Scotland

If nothing else, the title of this film is familiar to you all thanks to its connection to the United States of America (US). According to hearsay, former Ugandan ruler Idi Amin Dada referred to himself as the “last king of Scotland” while using titles like “Conqueror of the British Empire,” “VC,” “DC,” and “Al-Haqqi,” and some others.

Forest Whitaker and James Mccavoy feature in the film, which centers on young Scottish doctor Nicholas Garigan, who meets Ugandan President Idi Amin and strikes up a connection with him while in Uganda. Unfortunately, this bond turns sour.

With a budget of about $6 million, the film was filmed in Uganda and raked in $48.5 million at the box office. It received multiple honors, including an Academy Award for best actor for Forest Whitaker, who starred in this film.

Tears of the Sun

This Sony Pictures Entertainment action film, set in the Nigerian jungles, was released in March 2003 as a worldwide release.

Bruce Willis and Monica Belluci feature as the film’s two primary protagonists. Dr. Lena Kendricks (Monica Belluci) is in danger of being kidnapped by the Nigerian government, so Lieutenant A.K. Waters (Bruce Willis) and his crew are sent to rescue her in this action-packed 2003 film.

The US military and insurgency groups are hostile to A.K. Waters when he sides with Dr. Lena, who refuses to leave the nation and let her patients fend for themselves in the hands of terrorism.

An old-school action jungle movie that keeps you guessing as to who’s going to make it out alive and who’s not.

“Don’t Die For Nigeria, You Won’t Be Appreciated” – Erica Nlewedim Advises
Next Article

12 Things to Know About Sammie Okposo

5 Things Every Woman Should Know About Vagina Discharge